Since its organization in 1928, the Garden Club of Palm Beach has partnered with the Town of Palm Beach in multiple civic projects, parks, and programs that protect, conserve, beautify, and preserve this coastal natural barrier island in the Atlantic Ocean and the Lake Worth Lagoon. For ninety years, the Garden Club members have been active guardians of Palm Beach, attending Town Meetings, serving on Civic Boards, rendering financial assistance and underwriting, and often acting as a clearinghouse on matters concerning the beauty and the welfare of our town. In 1929 the Town asked the Club to help develop a “Town Plan” that called for a public park by the entrance to Palm Beach by Flagler Bridge. This is now “Bradley Park,” home to the Club’s Xeriscape Garden and host to the Garden Club’s annual “Arbor Day.” The Club planned with the Town to preserve the Lake Trail, a four mile pedestrian walkway along the Lake Worth Lagoon. By 1935 the Club financed and successfully planted three blocks of Royal Palms on Royal Palm Way from the ocean to the middle bridge entrance to the island. In 1938, the Society of Four Arts constructed a building on Royal Palm Way, and the Club was asked to design and plant a series of “demonstration gardens” in a small sandy strip. The Town praised this Four Arts Garden as the first garden opened as a gift to the community in Palm Beach. The basic “bones” of the island were now in place.

When rampart development threatened the island during the 1940’s and 1950’s, turning private lands and homes into hotels and apartments, the Garden Club urged the Town fathers to revise the old Town Plan and adopt new ordinances that would protect the island. After many hearings, the Garden Club prevailed upon the Town Council to employ a Zoning and Town Planning expert. In 1947 the Club led the Town Council in efforts to stop the sewage pollution of the Lake Worth Lagoon. The communities were stirred to action to discontinue lake and ocean sewage outfall and to provide adequate sewage disposal. Since 1954 Lake Worth has been free of sewage outfall, and the Atlantic free from ocean dumping. The Club Civic Affairs still continues to monitor all water issues.

In the 1970’s the Club proposed the Town Council enact the “Historic and Specimen Trees” ordinance, and assisted in identifying and documenting the trees. One of the first strict tree protection laws in Florida, the list is updated annually. Along the mid-town seawall walkway, the Club planted drought and salt resistant plants. By 1980 the Club and the Town Public Works Department developed a partnership to beautify public areas and parks, using native plants and drought resistant species. They worked together to control “lethal yellowing”, a disease that kills palm trees.

The 1990’s saw severe erosion of our shoreline; the need for shore protection prompted the Club to plant the sand dunes with sea oats. The Club worked with the Town to preserve green-space for the Par Three Golf Course, undergoing reconfiguration (2009). Downtown Peruvian Park was a Garden Club project. In 2008 the club donated the Kaleidoscope Flower Beds on Royal Poinciana Way. Our renovated Town Hall was assisted by the Club in landscape funding. Each Arbor Day, the Garden Club, with local schoolchildren, dedicates and plants a flowering tree in Bradley Park.

There have been many other town beautification projects that our club has undertaken in the last decade. Among them are a landscaping installation of drought and salt resistant plants along the ocean in midtown, which included seating and handicap access, a xeriscape garden in Bradley Park, the donation of a fountain in Peruvian Park, the idea, design and funding for the Living Wall on Worth Avenue, the Oasis Circle at Southern Boulevard and South Ocean Boulevard, landscaping for the newly restored Town Hall, and a major donation to the landscaping of Memorial Park.

Current town beautification projects that our club has undertaken in this decade. Contributed to the design and restoration of Bradley Park, featuring the Tidal Gardens. 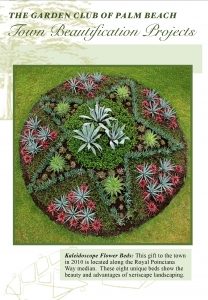 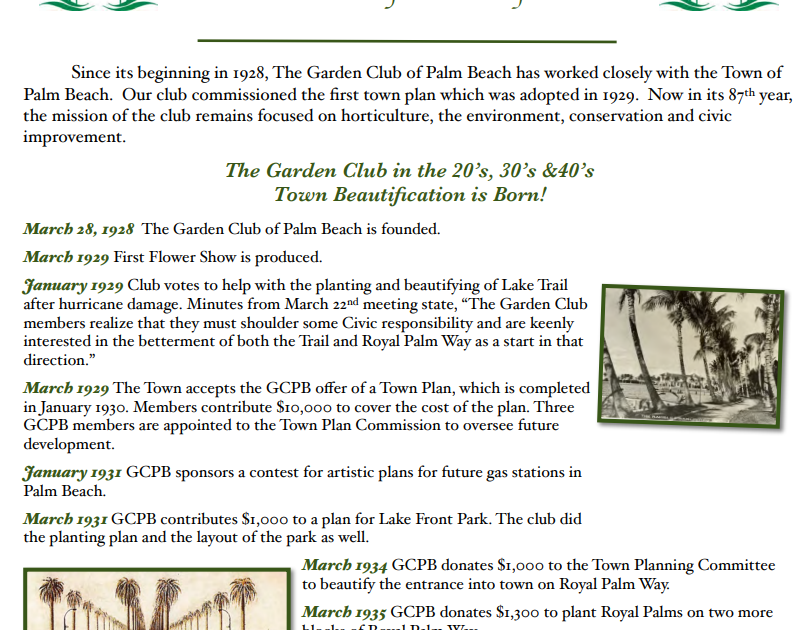